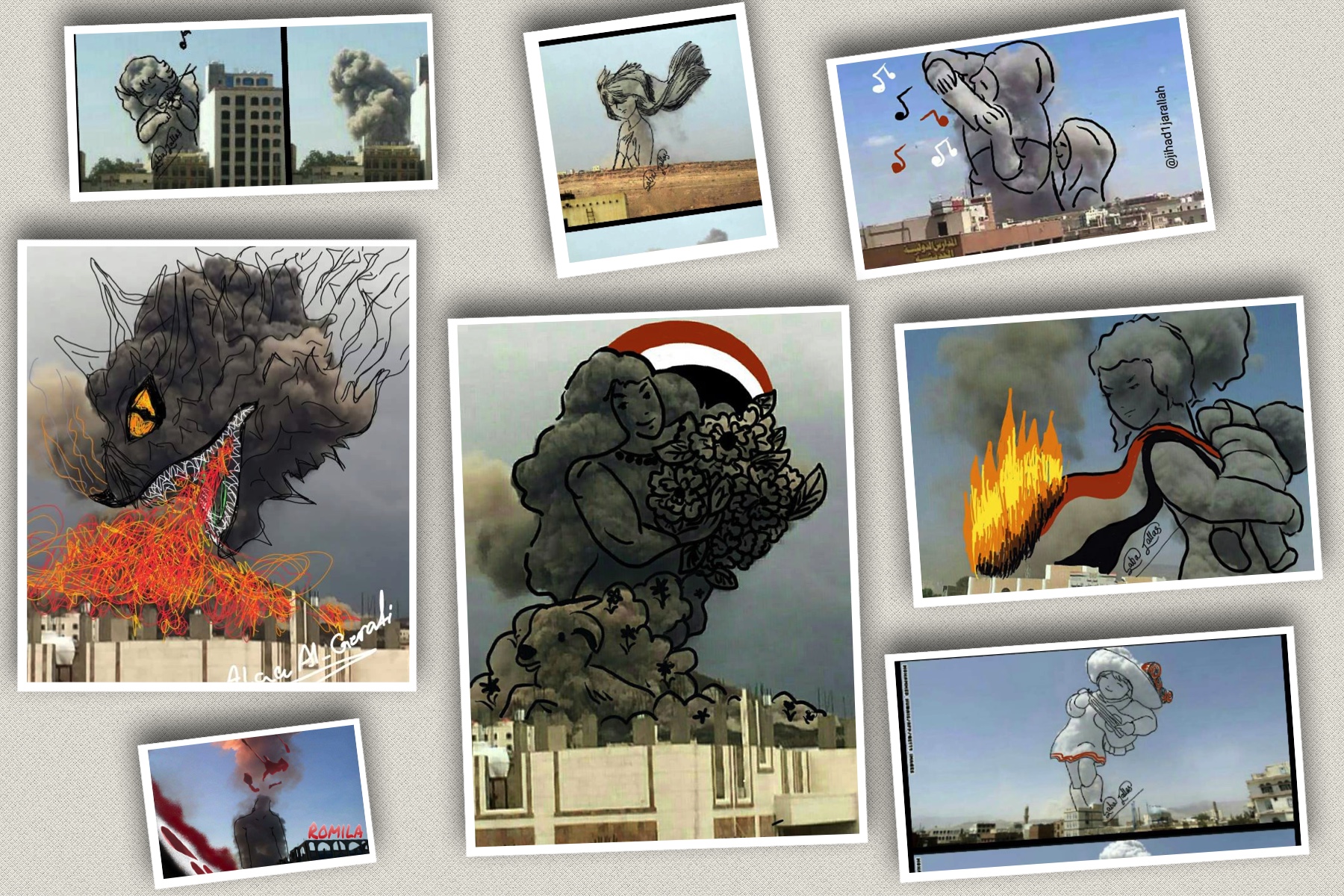 No match to what is happening in Yemen. It is the only interstate war in the world nowadays, the biggest war in the country’s history. Has the world forgotten us? Or you just never heard of our war? The war between the mighties and the weak state. All rich Arabs with their high-tech weapons and Western allies against us, the poorest Arabs. We are under siege by battleships and countless fighter jets. It is David against Goliath, but with no heroes.

War is not on our television screens though. We do not have fuel for electricity and airplanes have destroyed our TV stations. But for how much longer should we keep sending pictures of bomb clouds painted in love colors? How much does it need for the world to see our suffering? We fear the world can not hear us.

Love from Sana’a, drawings by Jihad Jarallah. Click on the pictures.

It has been half a year of daily explosions in schools, hospitals, refugees camps, airports, water factories and ancient buildings. They say it is collateral damage. We say it is our neighborhoods. They say they want to liberate us from our own devils, the rebels that took over our country. We say, they live among us. Take your enemies away with you. Take also all military bases from our cities. Let all warriors go to battle it out in our vast desert. Take with you all war toys of our children and bury them under the sand, far from us.

With each bomb, people feel vibrations of pain in their stomachs and defiance in their souls. The brightness of airplane bombs have stolen the calm of our nights, while our days are lost between the search for normality and the sound of rockets. For how much longer should our young people keep painting a sense of love in the chaos of war? This war has occupied all the space in our minds. But still, we can not find any true meaning in it. Thus, we keep painting pictures of death with colors of hope for a deliverance or a sense. We keep raising our slogans and coloring the dark clouds of destruction.

Voices from Yemen, drawings by Saba Jallas. Click on the Pictures.

We are the women, the children, the young and the elderly of the once greatest civilization of the Arabian Peninsula. But now, it is the smell of death and the fear of hunger that overwhelm us. The weakest and unfortunate among us have died already. Our beloved capital, Sana’a, the second-oldest city on planet, is being destroyed. Does this sound unbelievable? Ask Gabriel Gatehouse from BBC who broke through the walls of fear and apathy to tell our story. Ask the thousands of children and women dead and the ten million Yemenis threatened by hunger. Ask the one and half million displaced people and the generation of traumatized children.

Who to blame for our misery? The bombs? The armies that came to deliver them? The armies who supplied them? The recklessness of our politicians? Or the world who stood by as if we were not all together in this? In war, blame is an unfulfilling comfort, an easy escape from the failures of mankind. We are all vulnerable. We all suffer. Yet, we can also feel justice and stand against war. We can still make our voice heard for human solidarity.

A letter from Yemen by arabspree.net

———————-
Written by Mohammad Al-Saidi, September 2015.
Thanks for Renata Buriti and Bilal Al-Saeedi for the valuable support.