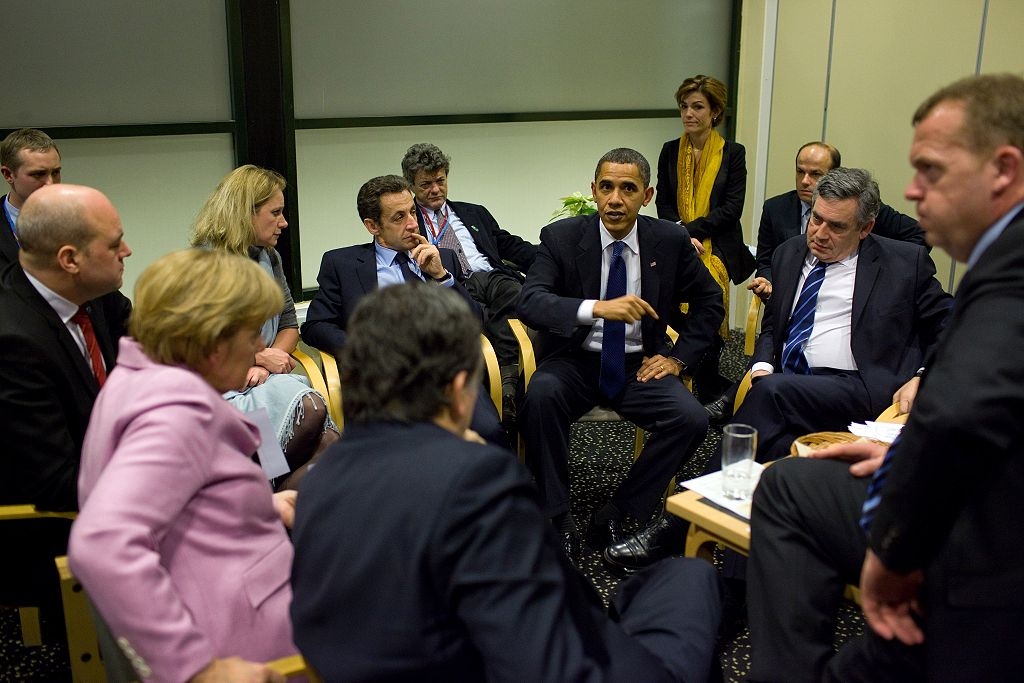 Obama has a strong sense for drama. His last-minute arrival on the final day of the 2009 Copenhagen summit was the make-or-break moment at a make-or-break conference.
The summit began on high note. Prior to the conference, many expected it would produce a legally binding treaty once the Kyoto Protocol expired. But predictably, a familiar conflict erupted between what have become two sides: the developed nations and the developing nations. This reached breaking point when the so-called Danish Text, which seemed to favour developed nations, was leaked to the press. For some, the text did not go far enough and represented a departure from “North-first” spirit of climate conventions.
Leaders from developing countries exploded. The usual leftists like Bolivian President Evo Morales or Venezuelan President Hugo Chávez spoke out against the draft. But the most notable protest came from the head of the Sudanese delegation and the chairman of the G77, Lumumba Stanislaus Di-Aping. He described the impact in Africa of a two-degree rise of temperature as murderous and compared the agreement to the Holocaust.
As the summit collapsed towards failure, Obama dropped in to navigate negotiations with China. Instead however, the BASIC countries (Brazil,America, South Africa, India and China) negotiated a “politically binding” agreement in form of the Copenhagen Accord. Nations did not adopt this accord but “noted” it – in the bureaucratese beloved by the UN – in the final outcomes document of the summit. This way, the accord became only a “reference” for future talks.
The Copenhagen Accord did not include any binding emissions reduction targets. It stated that nations agree to keep within the two-degree target while mentioning the social and economic development as a priority for developing nations.
So, did Obama’s intervention save the outcome of Copenhagen? If the choice was between something and nothing, Obama’s visit certainly helped.
Minor progress, major drama
Climate negotiations have their memorable and often awkward moments. In 2007 at the Bali summit, the head of the US Delegation Paula Dobriansky announced during the final plenary that the U.S. would end its fierce opposition to the Bali Roadmap. A loud cheer erupted in the hall. Without this climb down, the summit would have failed. Bush’s team had capitulated in the face of irreparable damage the US’s international reputation.

But the Bali Roadmap will not go down in history quite like the Copenhagen Accord. It delayed the arrival of a binding agreement by two years until the Copenhagen Summit. And, as we know now, this did not materialize.
Since Copenhagen in 2009, the climate conferences have taken on a world tour: in 2010 Cancún in Mexico, then Durban in 2011, Doha in 2012, Warsaw in 2013, and most recently in Lima, Peru in 2014.
Cancún delivered the Green Climate Fund to pay for any climate adaptation and mitigation measures in poorer countries. Well, in theory. Its coffers remain low. Some labeled Durban a breakthrough. But in truth it did little but agree to develop a new agreement by 2020.
In Doha, nations agreed to extend the Kyoto Protocol to 2020. This deserves applause. But it was thanks to the controversial voting procedure of conference president, Abdullah bin Hamad Al-Attiyah. He declared a compromise point was accepted if no one showed objection. There was no vote-casting. Responding to objections by some countries like Russia, the president promised to include a note in the final report.
But the summit failed to make significant progress on the thorny issue of funding climate adaptation projects. One small step for climate conferences; an even smaller step for climate change.
The conferences of Warsaw in 2013 and Lima in 2014 made minor progress with major drama. In Warsaw, Philippines delegate Naderev  “Yep” Saño announced he was going on hunger strike after his emotional speech about the disastrous effects of the Haiyan typhoon on his country, overshadowing the conference.
Lima postponed any agreement until Paris in 2015, almost ensuring the conference would barely dent the history books until Pope Francis arrived in the city and described climate change as “urgent moral imperative”. With this, climate change has become a ‘holy’ and ‘real’ issue for some.
Time is ticking
All eyes now are on the next climate conference in Paris, 30th of November until 11th of December. Many countries have already filled in their commitments to the conference, and the Pope is off preaching to the UN, world leaders and the media.
Pre-conference controversies are emerging. The conference cost is rumored to be around 170 million euro (20% more than the Copenhagen conference). Companies like Renault and Air France will help cover this cost, to the displeasure of some environmental NGOs.
On the topic of finance, while nations have committed annual donations to the Green Climate Fund to reach the 100 billion USD per year onwards from 2020, current contributions fall short by a huge margin. In 2014, the fund had around 10 billion USD and there are few pledges in 2015 ahead of the Paris conference. To make matters worse, in 2014 the UN Secretary General announced in Lima that adaptation measures to climate change, especially in developing countries, will cost double or threefold the amount previously estimated (around 150 million USD between 2025 and 2030 and 250-500 million USD in 2050).
While climate negotiations and climate change politics are complex and tedious, the urgency of a new global accord cannot be more obvious than in 2015. New alarming data show that it might be too late to undo some of the effects of climate warming. Antarctica holds enough ice to raise sea levels by 58 metres and several new studies suggest parts of Antarctica may start melting irrecoverably on human timescales. Separate research shows that the entire Antarctic ice sheet would melt if we burned all known fossil fuel reserves.
It is clear that the stakes are very high, and time is ticking for climate negotiators and the narrow-mindedness of conference politics.
At the same time, there is no one make-or-break conference in international climate politics. Climate change – and the politics of it – is here to stay, indefinitely. It will not go away if one conference fails. The pressures of raising water levels, changing cropping patterns, droughts and heat waves will always remind policymakers to act. Yet, bearing in mind the record recent warning and the urgency to act, a question remains open: are climate conferences and related conventions adequate?

[box] What about the Earth Summits? Since creating the United Nations Framework Convention on Climate Change (UNFCCC) at the first Earth Summit in Rio in 1992, there’s been 20 climate summits, or COPs (Conference of the Parties of the UNFCCC), 9 MOPs (Meetings of Parties of the Kyoto Protocol which was adopted on COP 3 and came into effect in 2005), and two Earth Summits. One in Johannesburg in 2002 which was rendered inconclusive due, in part, to the absence of the U.S. under the Bush Administration and another in Rio in 2012 (Rio +20). Rio+20 was not a climate conference, but rather a development conference and its most public achievement to date are the Sustainable Development Goals launched in New York in September. In fact, since the 1992 Earth Summit climate conferences have had little to show for themselves, other than keeping alive the hope of saving the Earth from the devastating consequences of rising CO2 levels. While conference politics dominated the public discourse in recent years, the most significant commitments to reducing emissions have come from bilateral negotiations or self-commitments, bypassing the difficulties that come with the UN rules of consensus. In 2014, European countries decided to cut emission by 40 percent (compared to 1990 levels) by 2030. In the same year, the USA and China announced an historic commitment for the US to cut the emission by 26-28% (below 2005) by the year 2025 while China committed to cap output by 2030 or earlier and increase zero-emission technologies to 20% of energy sources. China and the USA account for 40% of global CO2 emissions. [/box]

Written by Mohammad Al-Saidi, 5.November 2015
This article was first published on the Future Earth Blog: http://www.futureearth.org/blog/2015-nov-5/make-or-break-moments-climate-conference-politics
Picture by Pete Souza